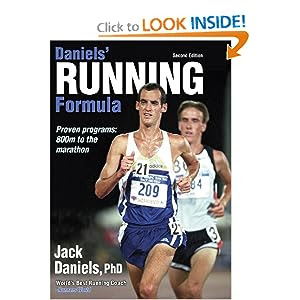 Now that the racing season is just about up (and good luck to those with target races, such as Philly, still to come), we thought it would be a good time to step back and think about, and discuss, training approaches as we look to 2011. Do you get a book? Do you get a coach? Do you rely on a higher authority?

What's worked for you, and what hasn't? Are you ready to take it to a higher level and build on what you've done already?
Listen to RRT 106

There comes a time in a runner’s career when she decides that just going our for runs every day, or every other day, is not getting her where she wants to go. Sure, literally, but we’re talking bigger picture. We thought it’d be worthwhile to give an overview of what you might consider in taing that (figurative) next stop, i.e., to pick a training program.

When I’m asked about training approaches, I suggest that people pick up a copy of Daniels’ Running Formula. I do this not to necessarily endorse Daniels’s approach but to have people read through the background section on physiology and the various systems that need to be stressed for improvement. Speed, distance. Tempos, repeats. MP runs, progression runs.

Daniels is also a proponent of periodization. In broad strokes, you break down the year into two 6-month periods and divide those periods up into quarters, and train differently throughout, building to a target race.

I am most familiar with Daniels, but have had exposure to other books, which have similar approaches (e.g., Pfitz/Douglas). I’m interested in hearing what other approaches are out there (e.g., Higdon, Hudson, FIRST).

We talked about sources for gaining insight on training. As an example, Steve Magness, who was on the show, just published something quite nice in Running Times concerning stress, and its usefulness. I’m not a fan of articles about the-best-workout-you’ll-do-for-a-5K/10K/Marathon/whatever-PR, but I find useful insights in things like Steve’s piece and other recent articles that focus on an aspect of training. For example, there was a good recent piece about Kim Smith about associating with (as opposed to disassociating from) pain and discomfort during training. I also found an interesting piece by John Kellogg about training for older runners. Again, things that get filed away in my brain as a way to personalize my own training.
That said, I will be speaking about turning yourself over to a coach. In fact, one reason for putting off the show was that I was meeting with a potential coach, who I have since decided to hire. Her thoughts are similar to mine with her own little tweaks. Plus it helps with structuring my training.
Posted by RunnersRoundTable at 10:03 PM

Amanda Lanza (http://chemerunner.blogspot.com/) hosted an interview with Ruth England of Rogue Running in Austin, TX (http://www.roguerunning.com/). In 2004, Ruth and two friends founded Rogue Running with the goal of applying elite level training concepts to everyday runners. They are an integral part of the Austin community, operating a specialty store, hosting race events and training hundreds of runners every year for marathons, half marathons, ultras and other goal races.

[Click Here to Listen to RRT 105]
Posted by RunnersRoundTable at 7:20 PM