We talk about weight loss for runners. The co-host are all successful losers (!?) and share their secrets with Toni. Margaret @butterflyrunr, an artist (see flutter-bys) who was interviewed by Runners World, Jereme @djgray1200 host of his blog SlimCache.blogspot.com, Andy @alinesjr, who was winner of the 2009 Buckeyeoutdoors weightloss challenge and who blogs at longrunsandliberty.blogspot.com and Heath. We had Brian from his Rushrunner blog and Joe Garland, host of RunWestchester blog in the chatroom. Joe recommended an article about weight loss called Science of Sport.

Tony (sjtony.blogspot.com) and Nicole(runningbebe.com) couldn't join us, but they were each important members of this team.

RRT 64: Running as you get older 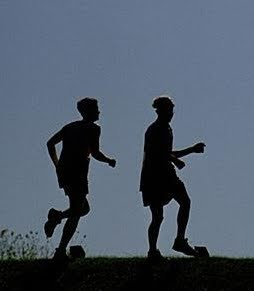 Toni (53) from www.drusy.blogspot.com and Joe Garland (53) www.RunWestchester.wordpress.com talked with with Judge Mike Harris (63) www.mikeharris.org and Tom Scriven (77) about running as you get 0lder.

Mike blogs on overall fitness, weight training and mental blocks to getting fit in Michigan. He views running as one leg of the three legged stool of wellness - along with diet and weight-training. Mike runs every day with his dog, though not long distances. We talk about the myth about running for weight-loss. Mike was a winner of the Body for Life championship in 2006!

Tom lives in Devon, started running at 55 and and stopped counting after completing over 100 marathons! He ran his first ultra in 1997, and has run eleven 24-hour races. In a German 6-day Ultra-track event in 2007, he completed ten Marathons plus 10K, total of 268 miles, but in attempting to run 12 Marathons in six days in 2008, he only ran 8, during which he tore his right knee cartilage and since then, following keyhole knee surgery plus a few other medical problems, hasn't run for over 12 months. He prescribes Vitamin G (Guiness beer)!
In the chatroom we had Charlie (www.cewtwo.com) Lesley (www.runlesleyrun.blogspot.com), John Ellis (www.the22miler.blogspot.com), Kiltrunner, Barb from her Kelownagurl Tris Podcast, Steve Runner from the Phedippidations podcast, Iain (www.devoniain.blogspot.com), Dennis (www.trainingandtannins.com), Matt from the Dumprunners Club podcast, and Lybbe from the 50 Counting Down podcast.

[Click here for RunnersRoundTable Episode 64]
Posted by Drusy at 8:22 AM