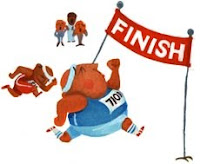 harlie (Running with Coffee), Mike (Westy's Running), Tim (RunDervRun), Eddie (Eddie Marathon), and Joe (RunWestchester) had a lively discussion on the events we enter and if we do so to compete or complete? If I work really hard to train but am still slow, am I an athlete? If I'm a guy and can't break 2:10 in the marathon, what's the point? Well, you just have to listen to find out.

We had a busy chat room and even had a special guest caller, although he called in as guest #9, we all knew it was really the ZenRunner. Here are a few of the folks who joined us (my apologies in advance to anyone I missed): Navy58, SteveRunner, CewTwo, ZenRunner, Aclements, theburnster, thecrazyrunner and fishadad.

There have been articles over the last few years that seem to say if you can't compete you shouldn't be out there. Although it was an ad from Pearl Izumi that provided the basis for the show along with articles like these which we talk about during the show.

The New York Times:
Plodders Have a Place, but Is It in a Marathon?
Chicago Times:
Chicago Marathon: Defending Slow, Fat, Poorly-Trained Runners
Slate.com (written, ironically, by one who many would call a "slowpoke"):
Running with Slowpokes: How sluggish newbies ruined the marathon
Daily Spark:
Poll: Should Slow Runners be allowed to run Marathons, too?
Hampton Road:
Are Slow Runners contaminating marathon prestige?
A different twist but some good points from a recent Running Times article:
The Marathon: A Race Too Far?
Click Here for RunnersRoundTable -- Episode 92

Posted by RunnersRoundTable at 12:37 PM

Listen in as Mike (Westy's Running blog), Albert (Albert Runs) and Lesley (Going the Extra Mile) chat with Dick Beardsley, elite runner, author, coach and motivational speaker about Running Camps. Also on the show were Chris and Kay, a couple of returning campers from Dick's Marathon Running Camp. The camp is held each September at Rainbow Resort in Minnesota with Marathon and Beyond magazine.

Dick is currently the third fastest American-born man in the marathon and joint winner of the first London Marathon in 2:11:48 (29 March 1981). But he's most famous for the race he didn't win (despite a 2:08:53 time!), one of the subjects of the 2006 book, Duel in the Sun by John Brant. And Dick has written his own inspirational autobiography Staying the Course: A Runner's Toughest Race recounting the stunning race in Boston that made him a celebrity and the difficult years that followed and his about him is his climb back to health after becoming addicted to pain medication after a farm accident.

The Dick Beardsley Foundation was recently established to help individuals who cannot afford treatment for chemical dependency. The work of the Foundation allows Dick to travel around the country, talking to children about positive, active lifestyles, and being chemically free.

Toni (Drusy's Blog); Amelia, a health and fitness coach from Sydney, Australia (AmeliaBurton.com); Brooke from Memphis; Petra from Lincolnshire, host of her blog Petra runs; and Marathon Maniac/running trainer Tory (Journey Fitness and runtoryrun.com) from Seattle talk about the causes and symptoms of overtraining. Can running too much have a negative impact on your physiological, biomedical, and psychological health? Friends and family? And for women, even your fertility. For iron deficiency, John ellis recommeded reading this post  at pfitzinger.com In the chatroom were Nigel from Running from the Reaper podcast, Matt from the Dump Runners Club podcast, Adam from the True confessions of a Medical Scholar blog, Margaret from her Flutter-bys blog, John Ellis from The 22miler blog blog, Clewsy (@clewsy), Chris Russell host of the Run Run Live podcast, Colin from his blog, Resurrected Runner blog, and Craig @Craigmacfarlane.

CONGRATS TO STEVE:
There once was a boy born in Milton, Mass,
Who lucky for us grew up as a NON-bad ass,
Though he proved quite the geek,
And, couldn't care less that he was not chik!
This boy was born of the Walker clan,
But, a walker to remain was NOT part of his plan,
Since his boy John he and Lynn had,
And of his growing girth he KNEW to be bad.
So, he gave up his "Cheesy Poof" eating ways,
And of the doomed couch which had occupied his days,
And decided to become active in life, and all of its ways,
And he took-up his podcast mike for MUCH more than a phase.
For you see this geek was an engineer,
The radio kind, you dolt, so don't sneer,
Automating stations he had traveled the world,
Only a Red Sox Banner he had unfurled.
That first Phedip was five years ago,
Initially a blog, but then BINGO!
For now two-hundred thirty eight episodes on,
We knew this show was no con!
For we liked as a friend this persnickety Steve,
And of his four-hour marathon we KNOW he'll achieve,
With coach and advisor John on his side,
'Fore long we KNOW he WON'T be denied!
This poem is our way of saying to Steve,
Congratulations!! Especially for helping to conceive,
Phedip, Runner's Roundtable and THE Extra Mile,
And we hope, that you'll stay a very LONG while!!
(Mark U)

Click here for Runners Roundtable - Episode 89
Posted by RunnersRoundTable at 3:57 AM