For the last few years minimalist running has been a hot topic and recently many runners have discovered Hokas, this show is going to be a round table discussion on how the two concepts work together. If you aren't familiar with Hokas as a brand and concept this show will tell you what you need to know.

I am sure the Hoka wearers that will be on the show will tell you why Hokas are the best shoes ever made. A few of the panelists may feel that they are just another fad and the Hoka concept will fade away or is that what folks think of minimalist running. During the show we will not solve anything related to minimalist running nor what brand or which shoe is the best minimalist shoe, nor what is a minimalist shoe but we will have a lively discussion on the topics.

Hosting the show will be Mike Westermeier (Westy's Running), a convert to minimalist running but not to Hokas and joining him will be some other minimalist's and Hoka wearers.

Posted by RunnersRoundTable at 10:08 PM 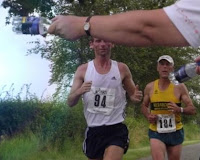 As endurance athletes we all get injured.  Click on this Talkshoe.com link to join the RunnersRoundTable's virtual chat room on Wednesday at 8:00 PM EST/7:00 PM CST/5:00 PM Pacific.  This version of the Runners Round Table will be hosted by Chris Russell (RunRunLive2.0 Podcast).  Join us for an hour of hands-on advice from the experienced fellow runners who know how you feel when you're injured.  Our distinguished panel will discuss how to avoid injury, how to speed recovery, how to stay fit and most importantly how to stay sane.

Currently planned panelists, all of whom have in the past suffered running-related injuries and are eager to share their experiences and recommendations, include:
Click here to listen to RRT-130

Posted by RunnersRoundTable at 4:25 PM