There were lots of people in the chatroom including Nigelrunner, host of the Running From The Reaper Podcast, Matt host of the Dump Runners Club Podcastt, Brian, host of the  "Triboomer" Stay Tuned Report Podcast, Gary Wall, who just completed his 50 mi at 50 run and blogs at Kinverkid.blogspot, Colin, host of the Resurrected Runner Blog and cyDave.

Click here for Runners Roundtable - Episode 84
Posted by RunnersRoundTable at 3:48 AM

From the moment Johannes Gutenberg pieced together the first printing press in 1440, the printed word has been helping to educate, motivate and inspire fellow runners all over the world to live a better life.

From the early days of CompuServe, GEnie, BiX, Bulletin Board Systems and Usenet in the last decade of the 20th Century: the “Web Log” (Blog) has gone far past its original purpose of an “online diary”.  Today there are over 112 million blogs (tracked by the search engine Technorati) being updated by people all over the planet; giving Blog readers an interesting and entertaining perspective that old mass media could never approach.
On this 83rd episode of the Runners Round Table, we’re going to talk about Running Blogs: listing MANY examples and discussing why this media format is so important to both the running community network and others who are contemplating lacing up their shoes to join us on the road.
What makes a “Good” Running Blog?  Why is a Running Blog such a powerful method of motivating and inspiring others?  How and does audio and video media change the way that Running Blogs are consumed?  What are the barriers to entry for would be Running Bloggers?  What are the best online services for blogging? Why should YOU start a running blog?
Pull up a chair as we look for the answers to these questions and more, with Steve Runner (host of the Phedippidations podcast, and his Intervals blog) at the controls (pray for us) along with Adam "Boring Runner" from , Eddie Marathon and THE Zen Runner (to keep Steve in line).

Here's a link to a BUNCH of great Running Blogs!

RRT 82 - Reasons NOT To Run A Marathon

Open a running magazine, listen to a running podcast, read a running blog, and there it will be. The M word. On the May 19, 4pm EST episode, we'll discuss whether one can in fact lead a rich and fulfilling runner's life without racing a marathon. Must it be the grail, the sine qua non, the McGuffin?
The panel will consist of folks who have run marathons. They've walked the walk. We'll see if they can talk the talk. Some have asked whether there is something more, and declined to define "more" as "longer." Hosting will be Joe Garland, who wrote about the debate on the first of the year and posted this for the show. He'll be joined by GirlInMotion's Flo (whose recent Boston was her swan song in the event and who's debated the issue herself), Mark U. of Run In America fame, Matt of the DumpRunners Club, and Colin Hayes of the Resurrected Runner. Colin did a somewhat disappointing 3:49:32 on May 15 and Matt was disappointed with a 3:03:59, and we'll be speaking about both of those.
So if you feel resigned to having long been herded to the "has-only-run-a-half" table at social events, perhaps you'll discover that that's where the cool kids are.
[Click here for Runners Roundtable - Episode 82]
Posted by RunnersRoundTable at 9:06 AM

RRT81 - Running to the Limits 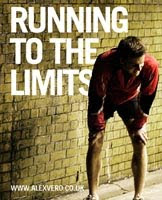 We talked with freelance director, motivational speaker and cameraman, (AlexVero.co.uk), who made a bold new year's resolution in 2006 to leave the lad's life of drinking and smoking behind and  become a 2:20 marathoner in two years. He produced a video, “Running to the Limits” that documents his journey toward his goal. We talk about the root causes of Britain’s decline from having 100+ sub 2:20 runners in 1985 to just 5 in 2005, how to become really fast and what it means for Kenyans and Ethiopians to win big races.


You'll have to buy the video to find out if he made it! (here) and a portion of the profits will go to support a great charity to get shoes and healthcare to African young runners  http://www.shoe4africa.org/sendshoes.htm
Co-hosting are Paul (host of RunYankRun Podcast and runyankrun.blogspot.com), Lisa (nurseontherun.com)  and Toni (drusy.blogspot.com). In the chatroom we had Joe Garland (runwestchester.wordpress.com), Steve Runner (Phedippidations podcast), Trucker George, Margaret (@butterflyrunnr and Flutterbys blog), Matt (Dumprunners Club podcast) and Chris (@theTechGuyChris).

RRT 80 - How to stay out of the Medical Tent

Listen in as Mike (Westy's Running), Albert (Albert Runs), Lesley (Going the Extra Mile) and Steve (Phedippidations) talk about their race experiences and how to avoid ending up in the medical tent along with what happens if you do venture into the tent.

Albert discusses his recent race which resulted in him spending quite a few minutes in the medical tent and we hear about Steve's recent Boston marathon where he should have spent some time in the tent. We discuss the most common reason most folks have issues, hydration.

Some products that were discussed during the show were Succeed (S-Caps) and Hammer Endurolytes.

My apologies in advance for the weak audio for me (Albert, Lesley and Steve sound great) and the technical issues at the end of the show that resulted in a few extra bonus minutes along with 5 minutes of silence.