Steve Chopper (host of the amilewith.me podcast) talks with Petra (www.petraruns.blogspot.com) and her husband Adam who are inviting UK runners to run together on their farm in Lincolnshire in 1.4mi loops.
Kris (host of the Geek Girl Runner podcast) and Jim "JayDub" (host of the B-HAG podcast) talk about their plans to run their own WWFOR in Sydney Australia!
From the chatroom, Iain (www.devoniain.blogspot.com) will be running (and more) at Ironman Hawaii in Kona for his race, and Craig McFarlane will be running the Chicago Marathon.


Its not too late to sign up for the Worldwide Festival of Races!       www.worldwidefestivalofraces.com 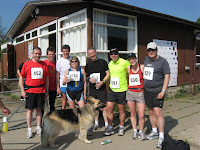 In the UK we hope to join together with Steve Chopper, Adam and Petra, Mark Wheeton, Harry, Toni (www.drusy.blogspot.com), Shelia, Gary Wall (www.kinverkid.blogspot.com) and Paul (The Run Yank Run podcast). Photo is some of us running the Swift Half in May. email if you want to join the Lincolnshire Lollop this year (runnersroundtable@gmail.com)

RRT 99: Trail Running for the Urbanite 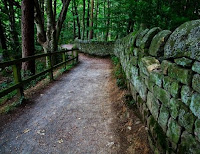 On September 22nd we discussed all things trail running for the city-dweller, including how to find urban trails, what shoes to use, trail races, when to drive to a trail and the all important, philosophical question: what is your position about running on golf courses?

Representing Los Angeles, we had Stuart from the Quadrathon blog and podcast. Amanda in Austin hosted the show, and hailing from Houston was Mark, author of the Run in America blog. Mike, host of the Westy's Running blog joined us from Minneapolis, and Chris from the RunRunLive podcast represented Boston, and many other cities that he visits. Amanda hosted, discussing Austin and Boston, and is the author of the ChemERunner Blog. 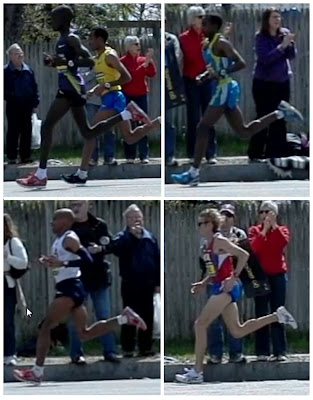 On Episode 97, Steve Chopper and the team were joined by Martin Yelling and Tom Williams from the MarathonTalk podcast.
Martin (right), husband of 2x Olympic Marathon runner Liz, is a former British duathlon champ and is now a leading running and tri coach. Tom (below) is a an experienced marathoner and 7x ironman finisher.
Together they produce the fantastic "Marathon Talk" podcast.

The guys have also been helping the London 2012 organizers in utilizing the power of social media, blogs and podcasts in the lead-up to the Olympics, so know a thing or two about the power of podcasts when linked to athletics.

They had some interesting insights to share with the live panel of Toni, Mark U from RunInAmerica, Joe from RunWestchester, Craig, and AMileWithMe's Steve.

Joining us in the chatroom, in addition to the panelists, were Matt the DumpRunner, Danny Norman, Steve Runner, The Curio, Nigel Runner (possibly related to Steve!), Catarcher and MedScholarAdam.

There were also over 20 "guest" participants in the live chatroom as the team discussed the power of interactive new-media in creating a global running community.

Posted by RunnersRoundTable at 10:12 AM